Mr Wilkins’ Shilling is a Ladies Morris side from Bath, Somerset.

We were founded in 1988 and dance locally and at various venues around the southwest of England.  The founders choose the North West style of Morris dancing as there were no other sides locally following the clog morris tradition at the time.  So, practicing over the summer of 1988, they were ready for their first dance spot behind the Jubilee Pub in Bath.  OK, so it was a practice run for the big event a few days later… On 16th October 1988 the side danced outside the Huntsman Inn in the centre of Bath. 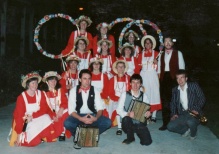 13 October 1988: Behind the Jubilee Pub for our first dance out 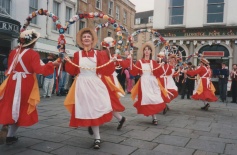 16 October 1988: Outside the Hunstman Inn, Bath – first public Dance Out 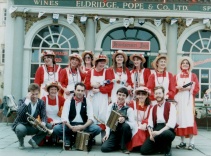 16 October 1988: Outside the Hunstman Inn, Bath – first public dance out

So, who was Mr Wilkins?  Well, no-one really.  At least, not outside Bath or Twerton.  Mr Charles Wilkins was the owner of the textile mills in Twerton (now a suburb of the city to the southwest of the centre, but back then it was a separate village) in the first half of the 19th century.  He had built them up from almost nothing and made a success of them.  He sold them in the 1840s to the Carr brothers of Cumbria who would expand them and make them a leading industry in the area until they closed down after WWII.  Charles Wilkins retired to the life of a gentleman on his brother’s farm at West Harptree, where he died of a stroke in 1851.

So, why call a morris side after a mill-owner?  Mr Wilkins was a follower of the Temperance Movement, and insisted his female mill workers were also of a similar moral stature.  He would fine any of them found in a public house at any time the pricely sum of one shilling.  And where will you find any Morris musician or dancer that’s been lost – try the nearest pub.  But good luck getting the shilling out of them.